Kaiser Health News recently released an article that reveals a secret FDA reporting avenue that is not accessible to the public. Most doctors and healthcare providers don’t even know about it, which limits their search for any known problems or defects with medical devices they may use.  mctlaw Attorney Ilyas Sayeg explains why our Metal on Metal Hip Replacement team is currently investigating. 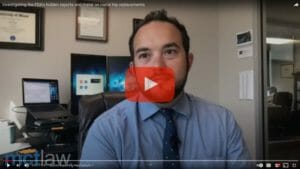 Recently, we learned through some strong investigative journalism from Kaiser Health News that some device manufacturers have been using a secret reporting mechanism to let the FDA know of some problems with their devices. We’ve taken this information and we’re now currently investigating whether any of the device manufacturers that we’re litigating with have also been using this secret mechanism. What this can result in, potentially, is an under-reporting of publicly available issues of problems and we need to know whether the products that our clients have had secret problems because if they’re secret than the public needs to know.

An article by The Implant Files investigates worldwide governments failing at protecting people from defective devices due to unsafe approval processes.  Just in the United States alone, the article states that “In the last ten years, there have been more than 83,000 deaths and 1.7 million injuries associated with medical devices.” The Implant Files is “the first-ever global examination of the medical device industry.”  They also provide the International Medical Devices Database, a database that contains information on worldwide medical device recalls, safety alerts, and more.  This investigative journalism and the database are great resources in the fight to keep patients safe from defective medical devices, like metal on metal hip replacements.