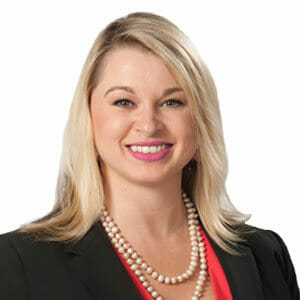 Jessica A. Olins’ practice at the Maglio Christopher & Toale Law Firm, focuses on the representation of clients in nationwide complex vaccine injury litigation. Ms. Olins graduated with her Bachelor’s degree from Redlands University and graduated from American University Washington College of Law. While at Redlands University, Ms. Olins excelled in leading and training her colleagues through new developments in spatial mapping, involving geographic information system software and geodatabase management applications. Before attending law school, Ms. Olins was the Paralegal and Office Manager for a boutique personal injury firm in San Diego, CA.

During law school, Ms. Olins was involved in the Transactional Law Society, preparing negotiation strategies for disputed contracts. Ms. Olins studied for a semester abroad at the University of Dundee, Scotland, focusing on energy, environmental and natural resources law. She began as a Summer Associate with mctlaw, in her second year of law school, primarily focusing on vaccine injury litigation.

Throughout her tenure with the Maglio, Christopher & Toale Law Firm, Ms. Olins has become involved with vaccine fee litigation as an active member in the Firm’s, Fees Committee Division. Her practice also involves engaging in subpoena enforcement in federal district courts nationwide. Ms. Olins is a member of the Firm’s Vaccine Injury Practitioners Bar Committee, assisting in the preparation and organization of the VIP Bar Conferences.

Prior to law school, Ms. Olins modified import automobiles and became the first female recognized for her work in Tuner Performance Reports Magazine. She was actively involved in the import automobile scene in San Diego, CA, and sponsored by an all-female race crew.