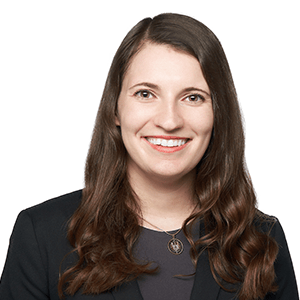 Elizabeth Abramson recently served as a federal judicial law clerk to Chief Special Master Brian Corcoran in the United States Court of Federal Claims Office of Special Masters. Currently, she is an adjunct professor of trial advocacy at the Drexel University Thomas R. Kline School of Law, where she also graduated from in 2019 with Honors.

Elizabeth’s interest in vaccine in jury litigation flourished while working as a law clerk for Anapol Weiss back in 2017. Since then she has gained knowledge about the rules and procedures that govern the Vaccine Injury Program.

During law school, she served as a lead editor of the Drexel Law Review. She was also a member of the nationally ranked trial team. Elizabeth has won several regional mock trial competitions, placed in the top three at national competitions, and was awarded the Best Direct Examination Award in the 2018 Joseph Paul Kelly, Jr. Invitational Mock Trial Competition.

Elizabeth was born in Pottsville, Pennsylvania and grew up on a farm in a town with a population of less than 200 people. She currently lives in Philadelphia with her husband, two cats, and dog. In her spare time, she enjoys reading and writing. She is also an environmental activist and focuses a lot of her attention on promoting a minimal waste lifestyle and sustainability. Elizabeth also enjoys board games, snowboarding, and watching foreign films.