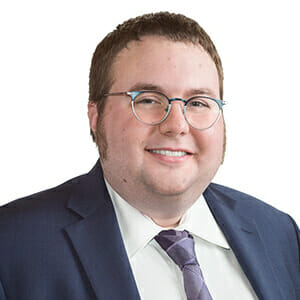 Kehl Van Winkle is an attorney at mctlaw based in the Seattle, WA office. His legal practice focuses on Indian Law and Civil Litigation.  Mr. Van Winkle graduated from the University of Oregon with a bachelor’s degree in linguistics and earned his Juris Doctor degree from Lewis & Clark Law School in 2017.

Mr. Van Winkle worked as an in-house attorney for the Sauk-Suiattle Indian Tribe where he represented the Tribe in a variety of economic development projects, including the opening of a casino and a marijuana dispensary. He also represented the Tribe in State and Tribal Court on Indian Child Welfare Act cases and served as the prosecuting attorney for the Tribe in Tribal Court. Early in his career, Kehl was selected for judicial externships with the Hon. Rebecca Duncan on the Oregon Court of Appeals and with Hon. Michael H. Simon in the U.S District of Oregon.

Kehl was born in Salem, Oregon where he met his high school sweetheart, now wife. In his personal time, he holds a leadership position at his church and has coached high school and collegiate debates. On a day off you’ll often find Kehl enjoying outdoor activities like kayaking, hiking, and camping. If you’re wondering how to pronounce Kehl’s name, it rhymes with whale.