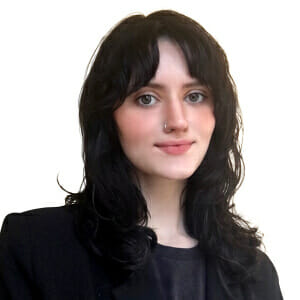 Elena Siamas is a Paralegal in the Seattle, Washington office of the Maglio Christopher & Toale Law Firm where she focuses on helping people who have been affected by Vaccine Injuries. She earned a bachelor’s degree in Political Science from Seattle University. Elena will be completing her Paralegal Certificate in December 2021.

Ms. Siamas was born and raised in Seattle, WA. Elena was involved in local politics before entering the legal field. She also worked for the Seattle Public Library and the Seattle Mayor’s attorney. She says that the most rewarding part about her job is collaborating with the other staff at mctlaw in all, not just those in her office but also those in Washington DC and Sarasota.

A few years ago, Elena had the amazing opportunity to study abroad in Berlin for six months, which inspired her to learn German. In her free time, Elena tours with her band where she plays the bass guitar.