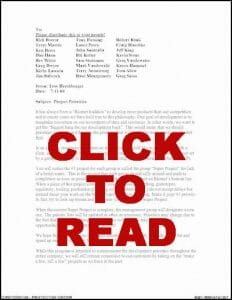 Internal documents about metal on metal hips that Zimmer Biomet (ZBH) fought hard to keep secret are now public, and some of the contents are troubling.
Recently, a judge ruled in favor of mctlaw demand to unseal dozens of Zimmer Biomet’s internal corporate documents that were kept hidden from the public.
Among the unsealed documents is a memo prioritizing the design and development of the Biomet M2a metal on metal hip as a “money project.”

This is the project that each group should rally around and push to completion as soon as possible. It will have the biggest impact on Biomet’s bottom line.

Dozens of lawsuits against Zimmer Biomet allege that corporate management pressured their development teams to put sales over safety when it came to metal-on-metal hips. The priority was to make “the most money.” There’s no part of this unsealed memo that mentions patient safety or pre-market testing:

…we want to get the “biggest bang for our development buck.” This would mean that we should prioritize our work and develop the products that will make the most money for Biomet first.

Poor design doomed patients with Zimmer Biomet M2a Magnum hips from the start. The cobalt and chromium metal surfaces of the hip and the socket rub and grind together, releasing microscopic metal debris into the body. That metal has destroyed muscle, bone, and other tissue around a patient’s hips. The metal debris is small enough to enter the bloodstream and cause cobalt-chromium metal poisoning throughout a person’s body.
Essentially, the litigation alleges Zimmer Biomet turned patients into human guinea pigs so they could sell their new metal-on-metal hip replacement models faster. The formerly secret document states:

When a piece of this project comes into your possession, (drafting, prototypes, regulatory, tooling, production planning, rollout schedule, etc.) do not accept delays…

You can read the entire contents of this newly unsealed Biomet internal memo here. The public can expect to see more damaging internal memos as Zimmer Biomet faces almost 20 jury trials against mctlaw attorneys. The first trial is scheduled for this May in Seattle, WA.