Johnson & Johnson issued a worldwide recall of their DePuy ASR Hip Replacement system as of August 2010.

Maglio Christopher & Toale Law firm is accepting these “out of deadline” DePuy ASR hip cases and litigating them through the state and federal court systems.

Johnson & Johnson is directing people who don’t qualify for the settlement to work through Broadspire to cover their medical expenses, but this is NOT the same as a settlement process.  In fact, the information you give to Broadspire could hurt your case in court.

Thousands of DePuy ASR hip patients face an uncertain medical future. Here are the steps you can take right now to protect your rights if you currently have a DePuy ASR metal on metal hip replacement.

What Should I do Right Now?

Hire an Attorney Now.  You need an experienced medical product liability attorney to represent you immediately.  Right now anyone not eligible and willing to participate in the DePuy settlement must still litigate their case in court.

Don’t wait. By law, you only have a limited period of time to file your case. Even if you haven’t had a revision surgery to replace the recalled ASR hip implant, you may still be able to file a case in court to protect your rights.

Don’t sign anything at all. First consult with a metal on metal hip replacement recall law firm such as Maglio Christopher & Toale Law Firm Otherwise, you could sign away important rights.

No Symptoms? You should still talk to your orthopedic surgeon, internist, and a knowledgeable attorney because you may have other hidden problems from the defective hip, such as cobalt chromium metal poisoning in your bloodstream or in the tissue around your hip.

In recently disclosed internal emails, Depuy upper management bragged about revision sales being “on fire” as a result of replacing defective metal on metal hip parts.

The Depuy Products Director, Derek Edgar, promoted a “segment of the hip portfolio that has been quietly but steadily gaining momentum:  Revision Hips.” He goes on to offer sales help to “retake our #1 position as The Revision Company.”

Paul Berman, DePuy’s marketing chief, writes an email reply saying “This revision segment is on fire and we must dominate (sic) it in the same way we did primaries.”

You can read the entire email here. 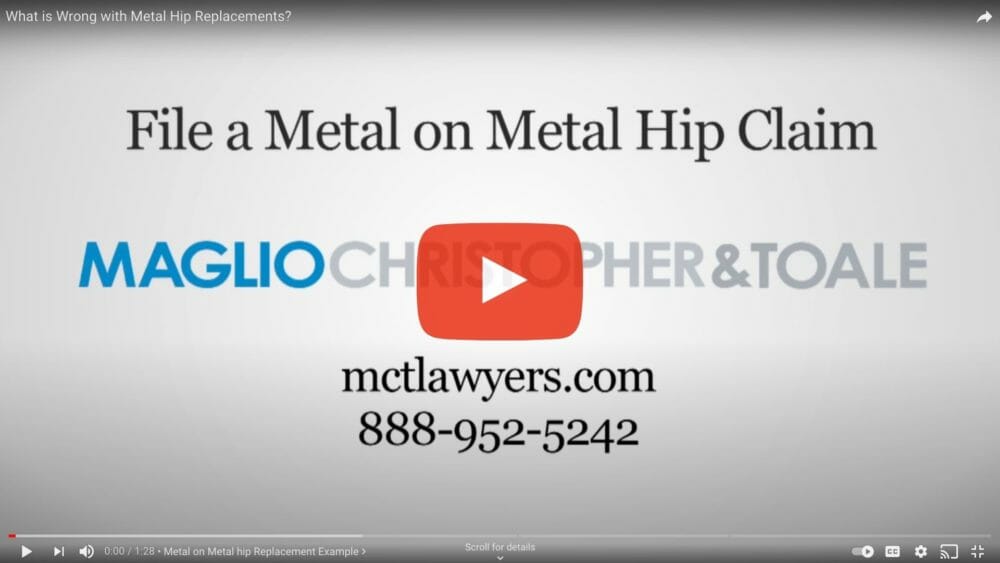 Call Now
I am excited to be receiving my final payment so I can put all this behind me. I am really grateful to everyone who played a part in getting me this well deserved settlement as my life has been negatively impacted over the years.
M.BClient
We cannot thank you enough for the services your firm has provided for Marie and I in our time of need. I could not have chosen a finer firm near or far to represent us.
John and Marie (Last Name Withheld for Privacy)
My first response is "Wow!" It has only been 11 months since I first heard of "SIRVA" and an HHS program that awarded compensation to its victims and only 7 months since MC&T accepted my case. I feel that your efforts on my part made all the difference.
A. Stoneburner
Thanks to you I am living comfortably in my own home with assistance. After my devastating GBS diagnosis from the flu vaccine six years ago, I didn't know what to do. Thank goodness I found you and your law firm. Thank you so much!
Name Withheld for Privacy
...Alison is a phenomenal attorney... When she put together the demand letter she was able to explain what I had been through and how I had felt... I want to thank your firm but personally thank all that had a hand in resolving my case.
Name Withheld for Privacy
The past 10 months have been a whirlwind to say the least but we are truly thankful, grateful and appreciative of ...all you have done for our family. This is truly life changing for us. The weight that this lifts off of our shoulders and the peace of mind it will give us....its priceless. So again, thank you.
Name Withheld for Privacy of a Minor Child
Thank you so much. It was so nice to deal with someone who treated us with respect and had a true interest in our future. This would not have happened without your hard work. Please tell anyone who helped with this that we truly appreciate it.
Martin (Last Name Withheld)
I am so grateful for all of your time and tireless work that you have put into resolving my case. Most sincere thanks.
M.R.
I just wanted to thank you for your help over the past 3 years...Thank you for negotiating with the DOJ in order to get as much as we could under the circumstance...It has been a pleasure having you and your wonderful staff here to assist me in this long and tedious effort.
Name Withheld for Privacy
I just wanted to thank you for your help over the past 3 years. I will be more than glad to refer anyone to you if I hear of someone with a vaccine issue or other related problems. It has been a pleasure having you and your wonderful staff here to assist me in this long and tedious effort.
George (Last Name Withheld for Privacy)
Thank you for all of your efforts all along to help resolve lifelong issues I will always have due to this defective implant. You have held my hand through a lot and each and everyone of you at MCT are appreciated for all of your efforts.
Name Withheld for Privacy
Mr. Maglio, I want you to know the appreciation I have for Diana Stadelnikas and her team for the effort they have put into my wife's claim! The settlement negotiation they achieved (in a very frustrating situation) is outstanding! While there's a way to go yet, I want to assure you will they have my full confidence and gratitude to the finish! I know you must be proud of your people!
W.C.
I thank you so much for your diligent and hard work on my behalf. You are a thoroughly professional and pleasant person and I am grateful for having you on my case.
Susan M.Client
Previous
Next