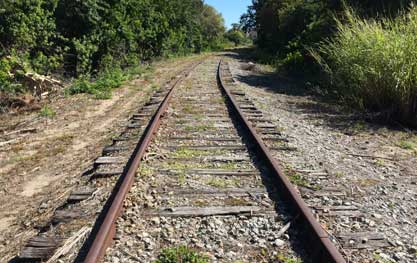 …nor shall private property be taken for public use, without just compensation.

If you own property next to an old railroad track that is being turned into a community trail, the federal government could owe you money. A portion of your land may have been “taken” by the government. Filing a claim should not stop or delay the rails-to-trails conversion project.

In 1983, Congress amended the National Trails System Act, which is also known as the Rails-to-Trails Act. The Act grants the federal government the authority to turn abandoned railroad right-of-ways into a nationwide system of recreational trails. The Act includes a program that lets railroad companies transfer the land under their railroad tracks to organizations, cities, or individuals who will convert it into recreational trails for public use. In order to transfer this land, the federal government, through the Rails-to-Trails Act, puts into motion a “taking” of the abandoned railroad corridors, which likely would have reverted to the adjoining landowners.

Typically this is how the process occurs:

What’s unusual in Rails-to-Trails land seizures is that the federal government takes what appears to be the railroad’s track for public use, but you may actually own the land under the tracks and thus be entitled to compensation.

Contact us if your property runs along the railroad tracks to the Legacy Trail extension in Sarasota, FL

‘Just Compensation’ and What it Means for Property Owners

The federal government has a constitutional right to take your private land for public use.  Sometimes the government takes away land to widen a highway or create a recreational trail for the benefit of the entire community.

In Rails-to-Trails conversions, if your property is next to the former railway, the government may owe you money for the section of land that makes up the new trail.  You may still hold title to the land even though you don’t have use of the land or even realize you had an ownership interest in the land.

Over the last 15 years, thousands of property owners have filed Rails-to-Trails claims against the federal government in more than 150 trail projects.

What is the U.S. Court of Federal Claims

The United States Court of Federal Claims is headquartered in Washington, D.C. but it hears cases against the federal government that originates anywhere in the country, including Rails-to-Trails cases.  It generally handles cases asking for more than $10,000 in compensation from the U.S. government. To make it easier for plaintiffs, judges can hold trials at local courthouses in the area where the dispute is located. That means you could go to trial in your hometown instead of traveling to Washington D.C.

Very few attorneys in the United States work in the Court of Federal Claims regularly.  All of the lawyers at mctlaw are admitted to practice in the Court.  Over the past 15 years, the firm has represented hundreds of clients in cases before the Court.

Meet the mctlaw lead attorneys who are heading up our Rails-to-Trails legal team.

Talis is a local attorney practicing in Pierce and Thursday Counties, as well as throughout Washington. He served as a Washington State Assistant Attorney General for 14 years before entering private practice. Talis is a native Washingtonian and 4 generations of his family hail from Pierce County.

Altom (“Al” and “Tom” combined – the names of his grandfathers) Maglio represents individuals across the United States in complex civil litigation. Mr. Maglio founded mctlaw in 1999 to represent people and not corporations or big government. Today Mr. Maglio serves as the managing partner of the Firm, which actively represents clients involved in complex litigation in all 50 states and all U.S. territories.
Altom is the President-elect of the United States Court of Federal Claims Bar Association and has been actively involved in the bar of the Court of Federal Claims for many years.