Law360 (March 15, 2022, 6:02 PM EDT) — The heads of two Oklahoma tribes have asked a D.C. federal judge to hand them a win in a suit against them and the U.S. Department of the Interior by four other tribes challenging their gambling compacts with the governor, saying the case lacks legal merit.

Chief Joe Bunch of the United Keetoowah Band of Cherokee Indians and Mekko Brian Givens of the Kialegee Tribal Town said Monday in a motion for summary judgment that their tribal-state gaming compacts with Gov. Kevin Stitt are valid as a matter of federal law and allow the two federally recognized tribes to run Class III gambling operations in Oklahoma under the Indian Gaming Regulatory Act.

Later rulings by the Oklahoma Supreme Court don’t override then-DOI Secretary David Bernhardt’s OK of the July 2020 deals made by UKB and KTT with Stitt, according to Bunch and Givens’ motion.

“The secretary had already received comments from Governor Stitt setting forth the governor’s position that he possessed the requisite authority under state law to enter into the compacts,” Bunch and Givens said. “The secretary took no action on the compacts during the 45-day review period under IGRA, and therefore, on Aug. 15, 2020, the UKB and KTT compacts were deemed approved pursuant to statute.”

The compacts remain valid and effective because the secretary didn’t disapprove them, Bunch and Givens concluded.

“Notice of their deemed approved status has been published in the Federal Register,” according to the motion asking the court to grant summary judgment. “No compact terms violate IGRA, and the statements and actions of Chief Bunch and Mekko Givens in support of implementing the compacts are true and not subject to federal law.”

Meanwhile, the four other tribes on March 8 asked U.S. District Judge Timothy J. Kelly in the District of Columbia for a partial win in their suit against the federal government, Stitt, and the leaders of the United Keetoowah Band and Kialegee Tribal Town as well as the Comanche Nation and Otoe-Missouria Tribe, claiming the gaming compacts have caused a competitive injury for their casino businesses.

The Cherokee, Chickasaw, Choctaw and Citizen Potawatomi nations asked the judge for partial summary judgment, arguing that Bernhardt’s decisions to allow the gambling agreements with Stitt to go into effect by inaction — “without a word of explanation” — were arbitrary and capricious.

Bernhardt, in allowing the compacts to take effect, failed to fulfill his obligations under IGRA because Stitt didn’t have the authority to enter into them, the Cherokee Nation and other plaintiff tribes said. The governor overstepped his bounds because Oklahoma’s attorney general in 2020 and the state’s Supreme Court in 2021 both found the compacts were invalid, they said.

“The agreements violate IGRA because they were not ‘entered into’ by the state of Oklahoma, as IGRA requires,” they said. “Stitt lacked authority to enter into the agreements on behalf of the state, as the Oklahoma attorney general ruled before any of the agreements were approved, in an opinion that was and is binding on the governor, and as the Oklahoma Supreme Court has since squarely held.”

Further, the four nations said, the Comanche and the Otoe-Missouria lack legal authorization to conduct Class III casino gambling at 10 locations, but they continue to do so, depriving their lawful competitors of lawfully gained revenue.

“As a direct result of the secretary’s no-action approval of their agreements, Comanche and Otoe-Missouria compete for Class III gaming revenues in the same markets in which plaintiff nations compete, which harms plaintiff nations’ gaming enterprises,” according to the motion.

The Cherokee, Chickasaw, Choctaw and Citizen Potawatomi nations are seeking to stave off the department’s October motion to dismiss their Sept. 22 amended complaint challenging the gaming compacts reached by Stitt with UKB, KTT, the Comanche Nation and the Otoe-Missouria Tribe.

The court should dismiss the case originally filed in August 2020, the Interior Department said, arguing that the plaintiff tribes don’t have standing to bring their suit because they have failed to allege impending injury. While the plaintiffs claim they would face more competition from the other tribes’ gambling operations, their allegations are “highly speculative,” the department said.

And the department, in allowing the compacts to go into effect, didn’t run afoul of IGRA because that law “does not require the [secretary of the Interior] to disapprove a compact over an internal state dispute as to compacting authority,” according to the motion.

An attorney representing Bunch and Givens, Jeffrey C. Nelson of mctlaw, told Law360 in an email Tuesday that the suit brought by the four nations allows his clients to demonstrate that their tribes’ compacts with Oklahoma are sound.

“The United Keetoowah Band of Cherokee Indians and the Kialegee Tribal Town did not initiate this litigation, but they are thankful for the opportunity this case provides to confirm that their compacts are valid and effective under federal law,” Nelson wrote.

Counsel for the Cherokee, Chickasaw, Choctaw, and Citizen Potawatomi tribes and Stitt were not immediately available for comment.

Joe Bunch, the chief of the United Keetoowah Band of Cherokee Indians in Oklahoma, and Brian Givens, the mekko of the Kialegee Tribal Town, are represented by Jeffrey C. Nelson, Altom M. Maglio, and Kehl Van Winkle of mctlaw and Klint A. Cowan of Fellers Snider Blankenship Bailey & Tippens PC.

John R. Shotton, the chairman of the Tribal Council of the Otoe-Missouria Tribe of Indians, is represented by Brett Stavin of Rosette LLP and Conly John Schulte of Conly Schulte PC LLO.

Mark Woommavovah, the chairman of the Business Committee of the Comanche Nation, is represented by Skip Durocher and Forrest Tahdooahnippah of Dorsey & Whitney LLP.

The federal government is represented by Assistant Attorney General Todd Kim and Kristofor R. Swanson and Matthew M. Marinelli of the U.S. Department of Justice’s Environment and Natural Resources Division.

The case is Cherokee Nation et al. v. U.S. Department of the Interior et al., case number 1:20-cv-02167, in the U.S. District Court for the District of Columbia. 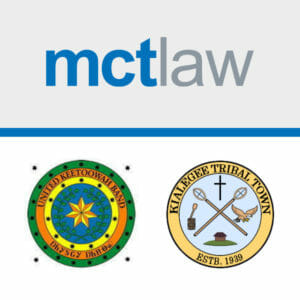