(Seattle, WA – November 28, 2017) – Three patients suffering heavy metal poisoning from a metal-on-metal hip replacement filed a lawsuit Tuesday in Seattle against Biomet Orthopaedics. The three patients experienced heavy metal poisoning, tissue and muscle necrosis, pseudotumors, and unnecessary revision surgeries because of the defective Biomet Magnum hip replacement, as alleged in the attached complaint. Thousands of other Washington citizens have this same hip implant and Biomet has failed to warn them or their surgeons of this serious problem. 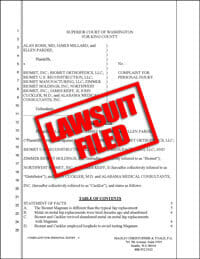 The lawsuit says Biomet sold the Magnum hip replacement without conducting any clinical testing before putting them into patients’ bodies.  Biomet then never warned patients and doctors when faced with compelling evidence that these hips were harming people.  “According to Washington orthopedic surgeons I’ve met with, there are currently thousands of patients in the state who have a Magnum hip in their bodies,” says lead attorney Altom Maglio.  “Our fear is that they don’t know about this possible ticking time bomb inside of them.”

Ellen Pardee of Seattle was implanted with a Biomet Magnum hip replacement in 2010.  In 2017 doctors diagnosed her with a large pseudocyst and severe tissue damage around the Magnum implant.  When surgeons opened her up, they found that “a large amount of turbid yellow fluid came out from a cystic structure.”  They also discovered a large tumor surrounding her IT band “with yellowish-brown caseating lining.”  The damage left behind was devastating. Ms. Pardee’s Biomet Magnum hip destroyed her iliotibial band and damaged her hip abductor tendon, along with all the muscles behind the Magnum implant.  She may never walk normally again.

Two Magnum Hips Go In, Only One Comes Out

James Millard had two Magnum hips put in:  One in 2009 and the other in 2012.  By 2017 doctors told Millard that both Magnums had to come out immediately and diagnosed him with extremely high levels of heavy metal poisoning. Tragically, Mr. Millard still has one of the defective Magnum hips inside his body today. Surgeons tried to remove it for 45 minutes by “pounding on to the stem to loosen it,” but they couldn’t get it out without fracturing his right femur. Now Mr. Millard faces a lifetime of worry that the cobalt and chromium heavy metals being released by the Magnum will continue to poison him.

Alan Rossi, MD is a medical doctor, but he is also a patient and victim of his Biomet Magnum hip. He ended up with a huge fluid-filled cyst in his hip and dangerously high heavy metal levels in his bloodstream.  When surgeons tried to remove the Magnum implant, the stem and adapter were “welded in place.”  The orthopedic surgeon had to rip open the femur to remove the stem and then wire the fractured bones back together around a new stem.  On an X-ray, it looks like barbed wire holds the bone together.

The Problems with Biomet Magnum Hips

Biomet hired Olympic gold medal gymnast Mary Lou Retton to sell the Magnum hip. Biomet aggressively promoted Retton as a Magnum hip replacement success story.  Unfortunately, Retton’s Magnum hip failed, and she had to have it surgically removed. Mary Lou Retton has had to file her own lawsuit against Biomet.  Strangely, Biomet continues to use Retton’s image and story to promote the success of the Magnum hip.

Biomet kept selling the Magnum hip in the United States until 2014, even after a worldwide recall four years earlier for very similar hip implants.  In 2015, the Australian government forced Biomet to recall the Magnum because of a higher-than-expected revision rate.  However, Biomet continues to claim that the identical product sold in the United States is not defective.